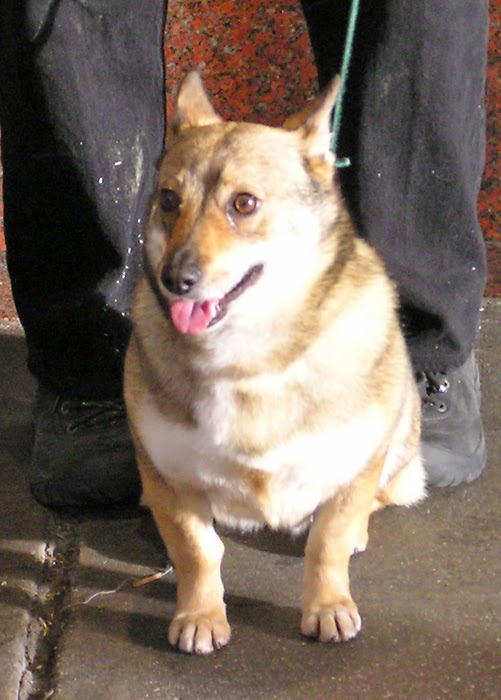 I’ve always heard a lot of people who said that they had done Westminster once and never cared to do it again. And that they hated New York. Well, being a country girl more used to quiet and open spaces, I went with an open mind . . .

And I loved it.

The city is such a collision of forces: old and new and in constant renovation, sparkling and pristine and dingy and brown with garbage bags piled outside. The residents and visitors meet in a cacophony of languages and a clash of cultures. The air is electric with lights and horns and sirens and an energy radiating from people in a way that I had never felt before.

Will I go back? I can’t wait. I want to go with Tom and to take some time to do more of the touristy things and the museums that I had to miss this time around.
It helps that I love to walk. You can get out there on the street and just go where your feet want to take you. The streets and avenues are conveniently numbered so that you can’t get lost. Now admittedly part of the time it was a little too cold for walking: Monday was just brutal. I believe that it was 12 degrees with a wind chill that took it to zero. Fortunately that was the day that we were benched, so had little time to be outside. 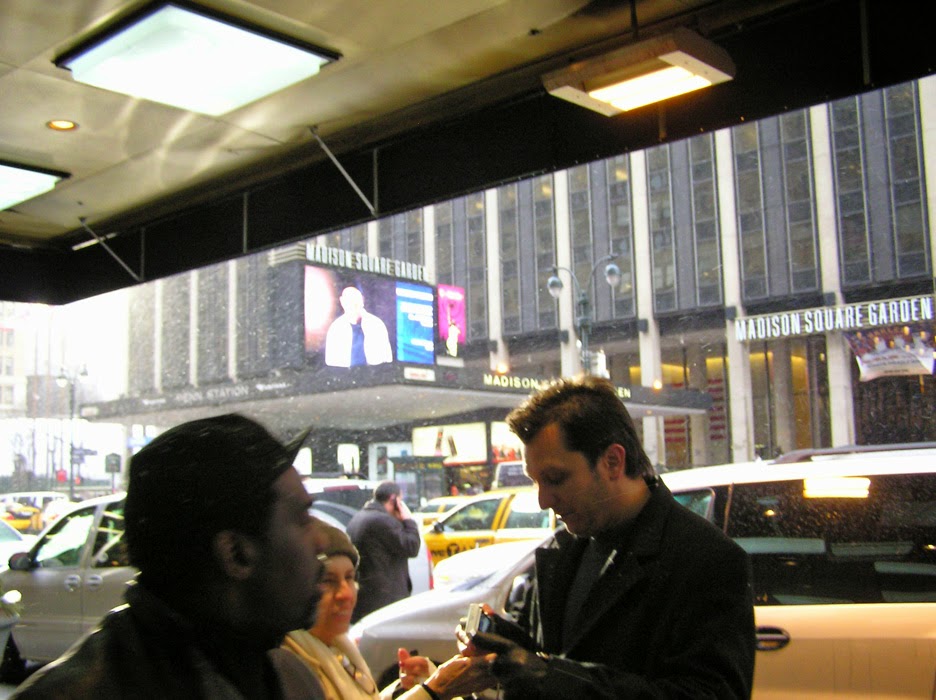 It had been reported to us that there were better places to stay. One person said that her room was like a closet in size. 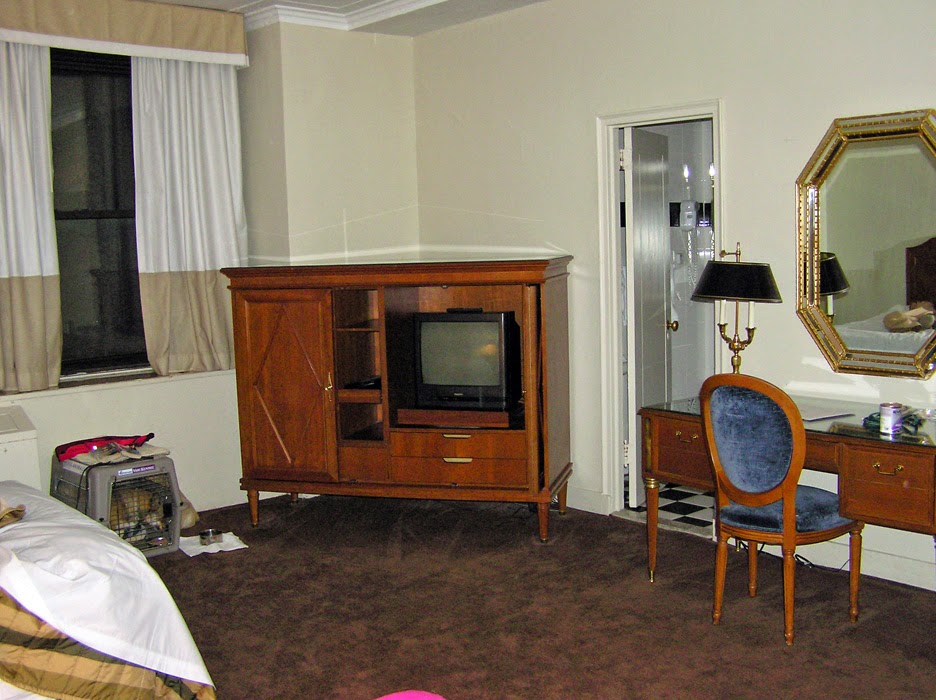 Our room, while one of the standard rooms and not redecorated, was clean and really big. Not shown in this picture is the walk in closet to the right of the bathroom. My only guess is that the person who reported that the rooms were small is a smoker, so was in a smoking room. Perhaps they’re smaller?

Scenes from around the hotel. 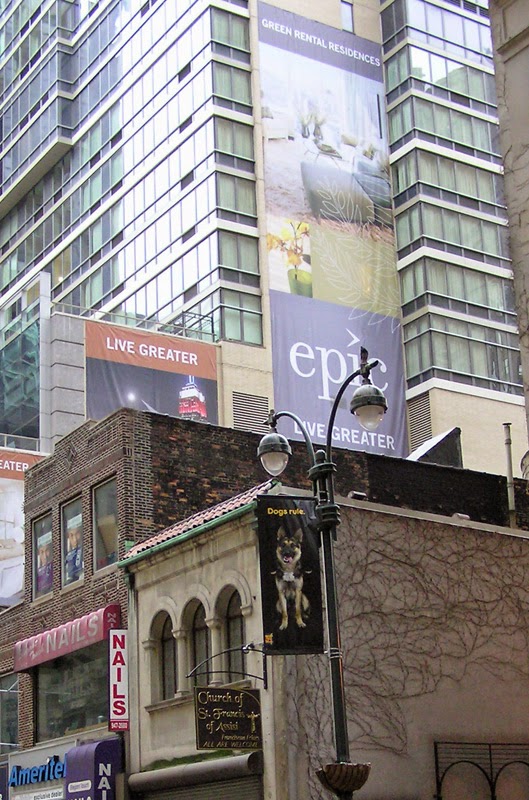 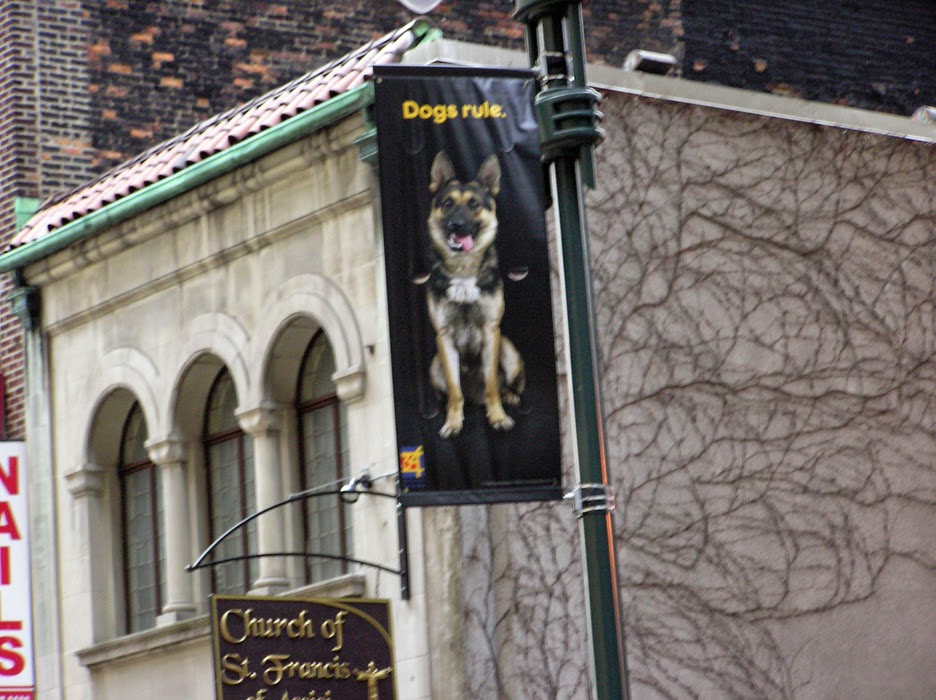 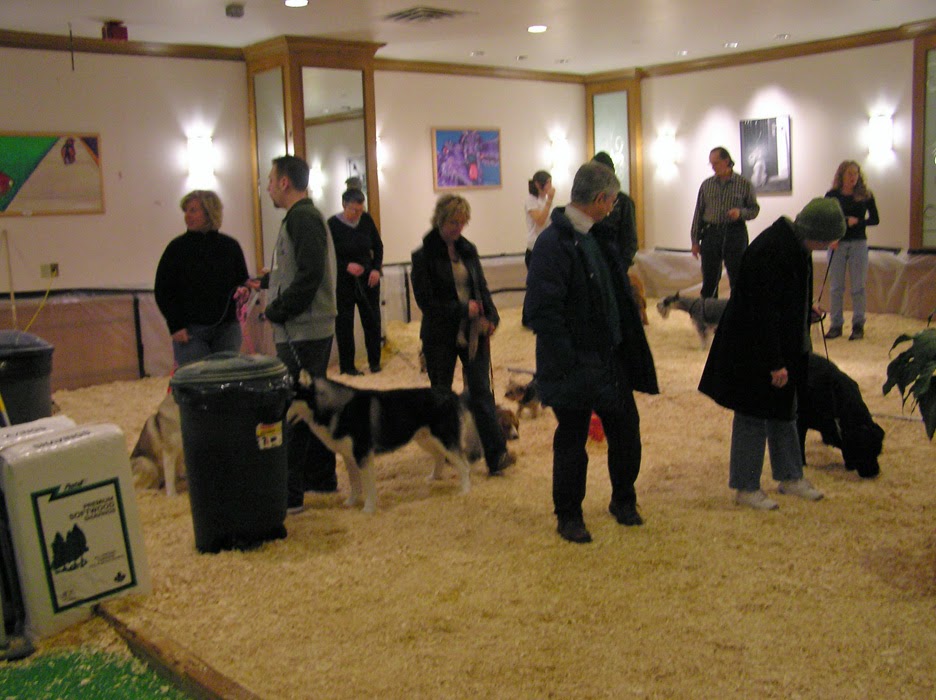 Downstairs was dedicated to the dogs. Outside was for exercising, not for pottying according to dogs like Nikki who had never before seen such an expanse of concrete. 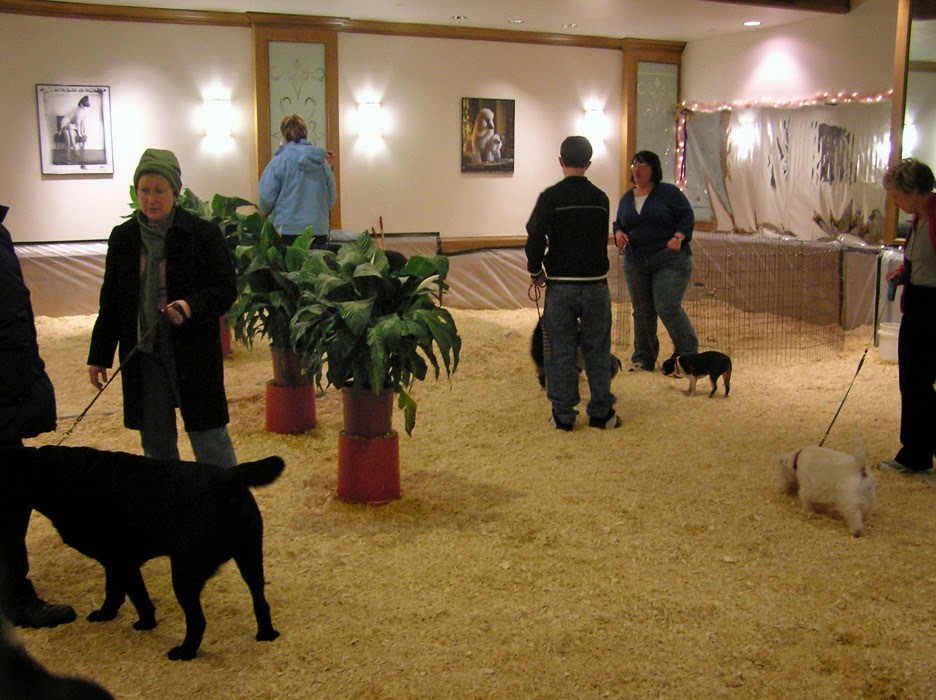 Of course by Tuesday afternoon, the ammonia smell about knocked you down.

Not pictured here were some of the other amenities: 3 dog treadmills, a spa room for bathing, and a dog psychic. Now I’m thinking that I really missed the boat here. Why didn’t I become a dog psychic for a profession? Heck, nobody could ever tell you that you were wrong . . . you’d just say “No, I’m not: ask your dog.” 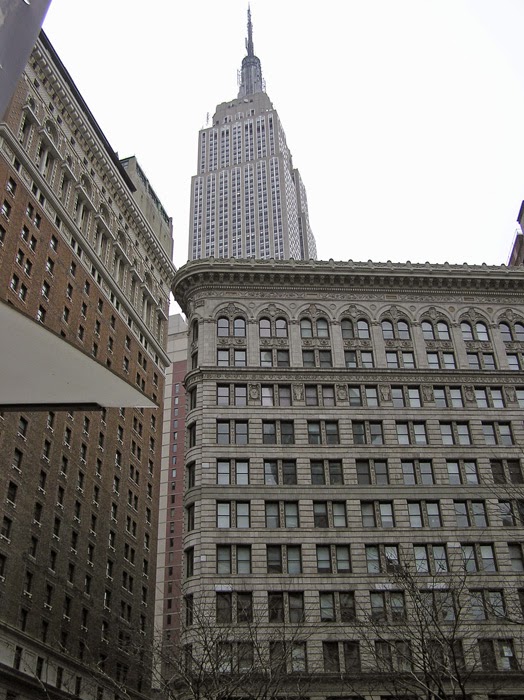 The Empire State Building from 6th Avenue behind the Penn.

Our room was on the 16th floor, on the north side of the building. You couldn’t see straight down to the street below, so our view was actually one block over, which was Macy’s. No shopping. We ran out of time. 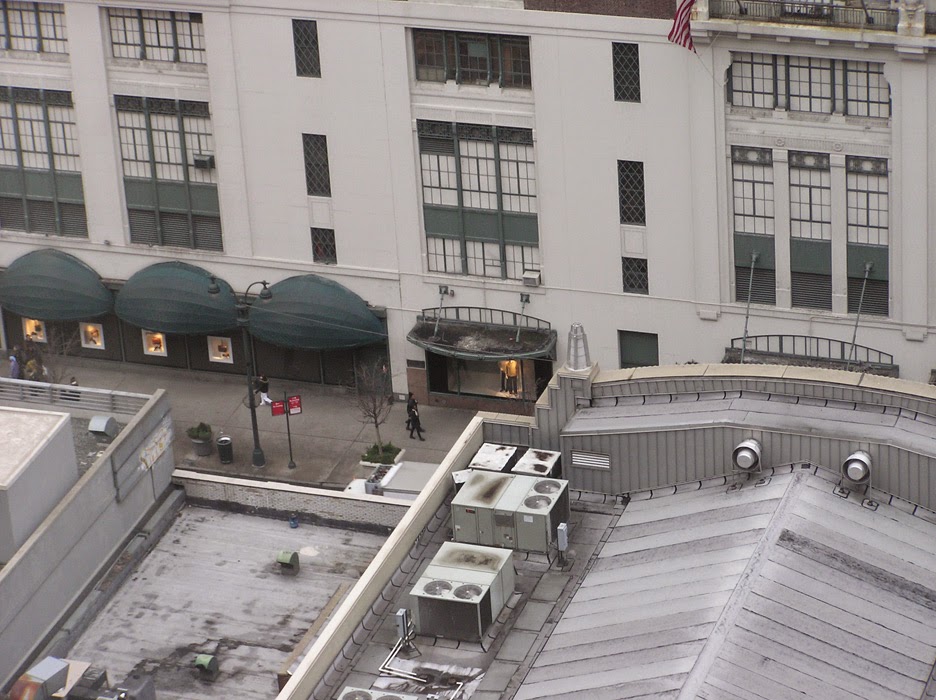 Camera zoomed in and looking down to the Macy’s side entrance on 34th Street. 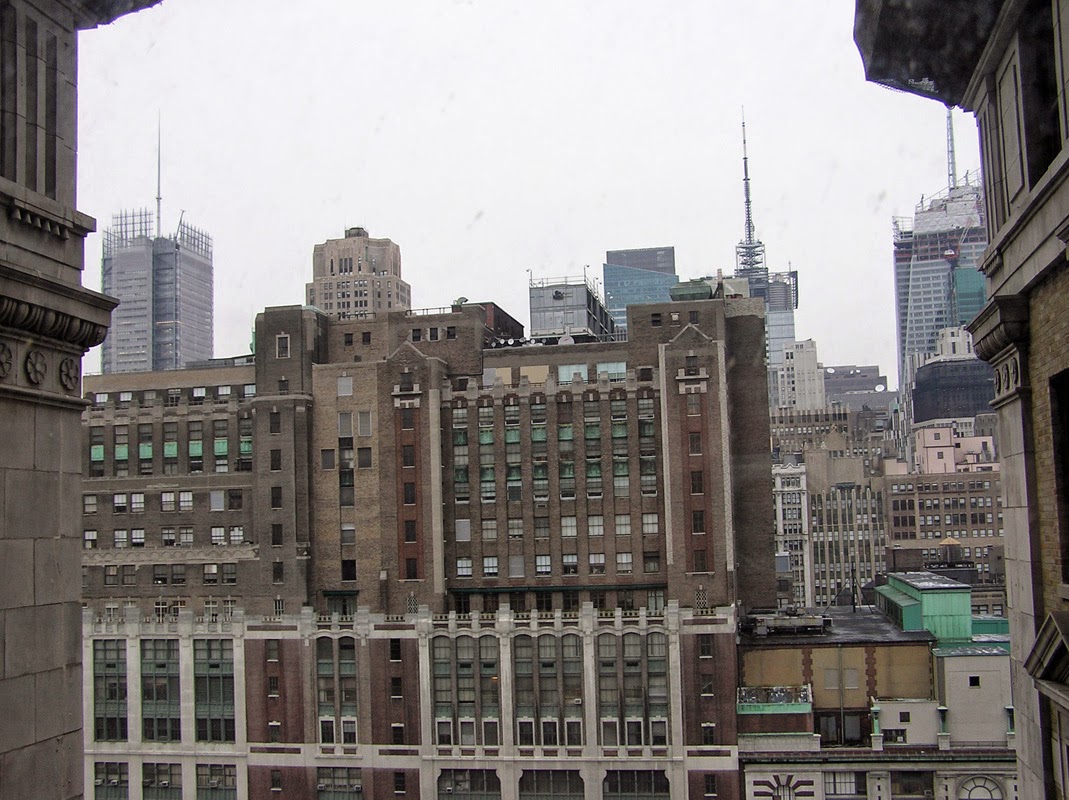 View out of our window looking straight across. One of the things that fascinated me about the older buildings is how many of them looked like buildings built on top of even older buildings with houses perched on top of them. I wondered at how stable this could all be, but I suppose that the ground in Manhattan is quite stable unlike the earthquake-prone west. During our visit to the park on Tuesday we could see how close to the surface the granite bedrock lies. 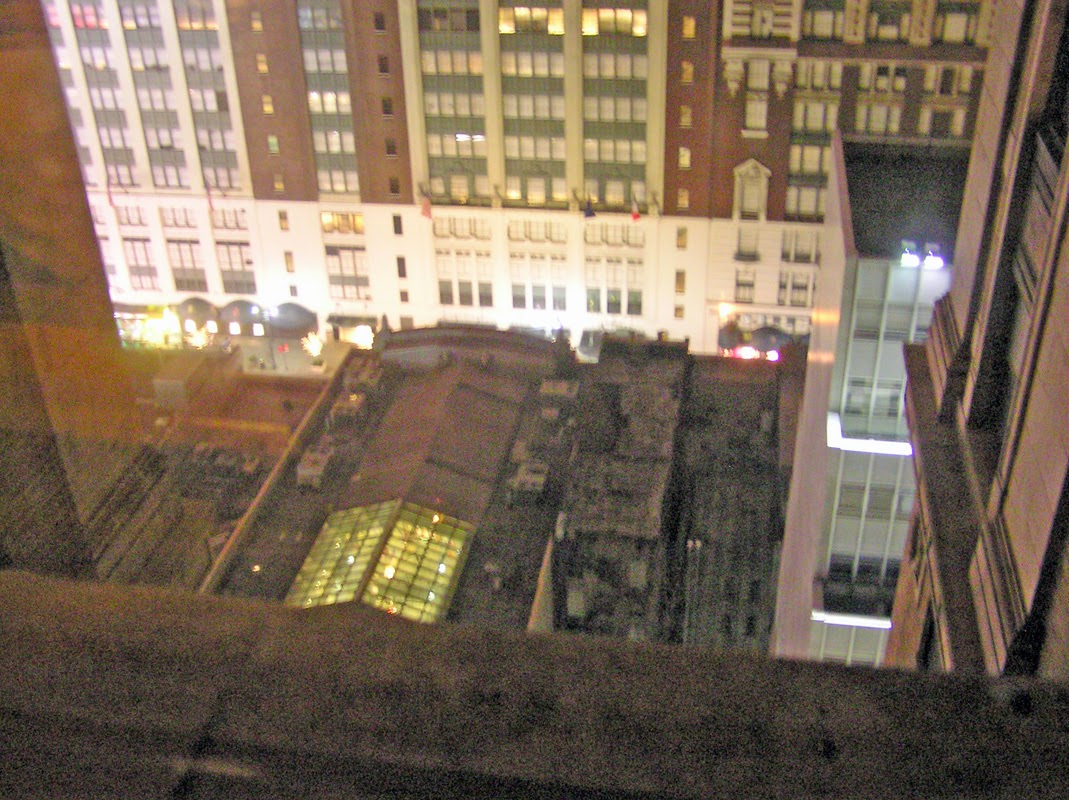 Nighttime view looking down at Macy’s.
Ok New York, here’s an issue I have with you. Out here on the frontier we’re getting a tad concerned about climate change. These days our pear trees are mostly done blooming before our “Pear Blossom Festival” happens in mid April. We turn off lights whenever possible, turn down the thermostat, buy carbon credits for the power we use in the house through Blue Sky and drive a Prius.You guys are leaving your skyscrapers lit up all night!

Yes, it’s pretty. And the flight in Saturday morning while it was still dark was like flying in to a living map. We could see the entire eastern seaboard outlined in billions of little gold dots. It doesn’t look like that flying in to the left coast.
Probably nobody knows where the light switches are. Maybe the buildings were designed without light switches! I’m sure that it’s nobody’s job to turn them off.
But somebody needs to be delegated to do it. We’re all in this together, guys!