Hurray! Pictures of another Hunter/Alice puppy arrived in my inbox yesterday. Jennifer K, we need pictures of Flash.

Here are some pictures of Ace (C-Myste Baledwr Civil Liberties) made at 5 and at 6 months: 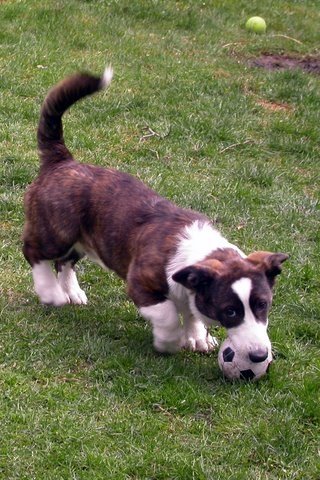 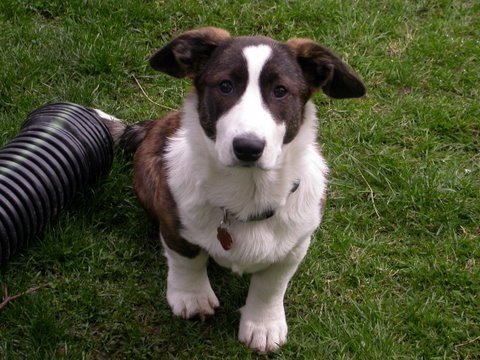 Yeah, his ears didn’t quite get up despite taping. He’s handsome anyway. 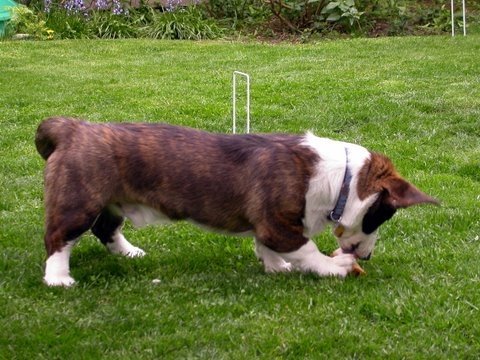 Playing croquet? Or eating the wooden ball? Oh, I guess it’s a bone. 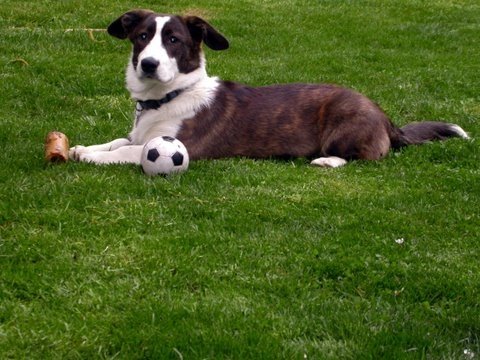 I really like his expression in this photo. Regal.

Here’s what Jane has to say about him:

“Ace is a very smart, sweet, athletic and handsome young dog -“a strapping youth.” He was over 30 lbs at 6 mos; probably over 35 lbs by now. Although they’ve grown slightly more proportionate with time, his great big white front paws are still one of his best features. His favorite games are Frisbee and soccer (it is marvelous the way he herds soccer balls as though they were miniature Holsteins…), and he had a great time on a recent family hike/picnic on the dikes/marshlands of the Skagit Delta. I wish I had photos from that trip – he tried out his agility skills (not yet strong) on the many drift logs, regularly falling off and even getting stuck between two logs at one point (these logs are completely stationary – unlike the dangerous beach logs out on the Pacific beaches). The tall marsh grass was another adventure – he would run ahead and, when we whistled for him, he would jump up so we could spot his ears and tail over the grasses. And then there was the beach itself – his favorite water activity is wading in to where the water is a few inches over his head and then paddling around until those big paws touch the bottom again.

“We could not have asked for a better puppy (because we know they all suffer from his one flaw – in that they would likewise chew up and eat everything within reach and then some – socks, toys, tree limbs, the porch, you get the idea). So, commend Alice once again for us, for producing such a wonderful litter. Ace has spawned a lot of interest in the breed from folks in the neighborhood and all over Seattle, from T-ball games to dog parks – wherever Ace goes, he garners fans (though they never will match his fan club at home). ”