Thanks to Jeri for the blog idea and motivation. I’d a lot rather talk about fronts than hips. For one thing, I think that I finally have some understanding of the correct front. I admit that I am still scratching my head about the vagaries of how hips are graded and the unknowns of the genetics.

One year ago at this time I had eight dogs here: Julie, Kacy, Alice, Phoebe, Huxley, Digger, Molly, and Nikki. I have to tell you that having five is a heck-of-a-lot better. In nothing flat this morning I was able to do everyone’s toenails. They aren’t groomed other than feet so cut me a break on that. But at least they aren’t muddy, finally having taken care of that problem.

The best way to learn about fronts, or for that matter any part of a dog, is to look at lots and lots of them. When you are comparing your own dogs to others it’s hard to not be either kennel blind or overly critical. Your emotions come into play and you may feel defensive. Once you have or have had a number of your own, you can compare them impartially to each other without feeling threatened.

Yes, we started out in Cardigans with (ahem) not the best of fronts. That has led us to be more discerning and more critical now.

In the last few years we have been blessed with a couple of girls with excellent fronts. 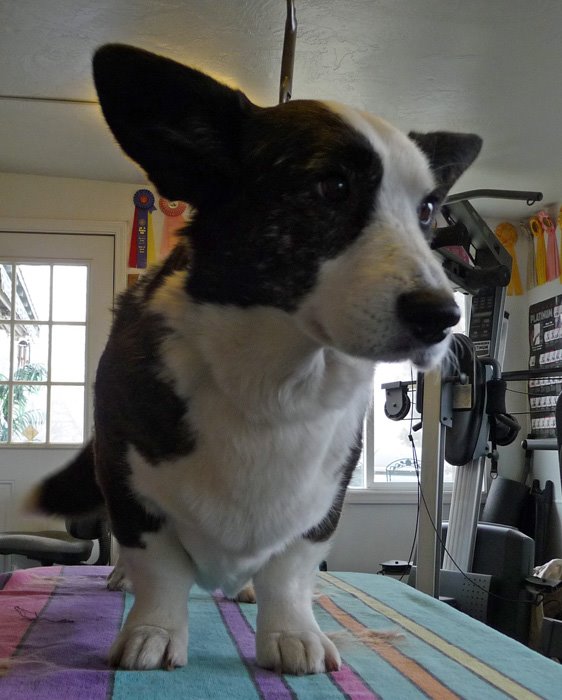 Alice (Ch Mariel Reese’s Alice Springs): mature 8.5 year-old bitch who has whelped 4 litters. Her chest has ideal shape and her arms wrap smoothly around it in a nice-fitting package. I don’t have pictures of her as a puppy to compare to as Alice was just short of 5 when she came to us. 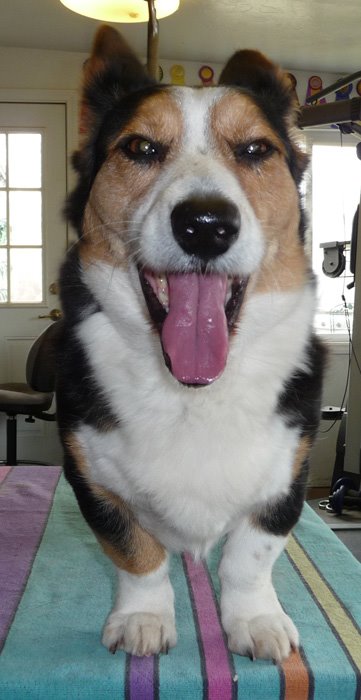 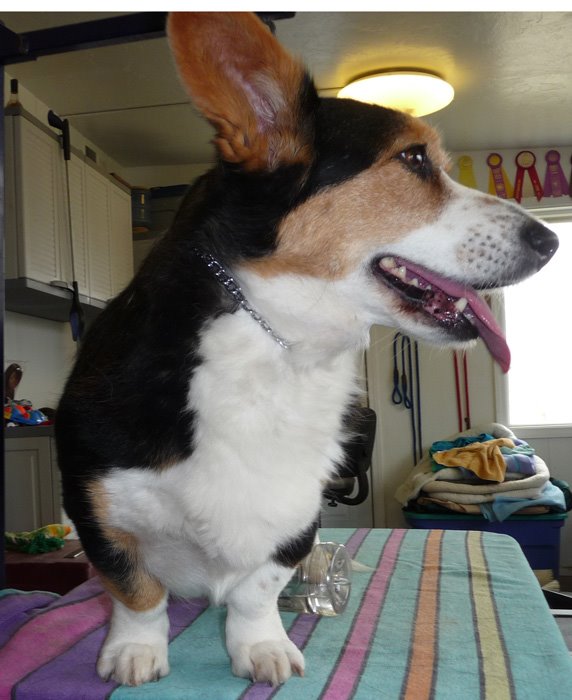 Phoebe (Ch Windshyre Stormy Weather): mature 7.5 year-old bitch who has whelped 2 litters. Like Alice, she has a good chest shape and smooth fit to shoulders. These are natural rather than carefully stacked pictures and you can see that she has slightly more turn out on her left leg. That is the leg that was broken near the growth plate when she was two. It’s not enough difference that it bothers me at all and it doesn’t bother Phoebe either except when somebody bites it again. 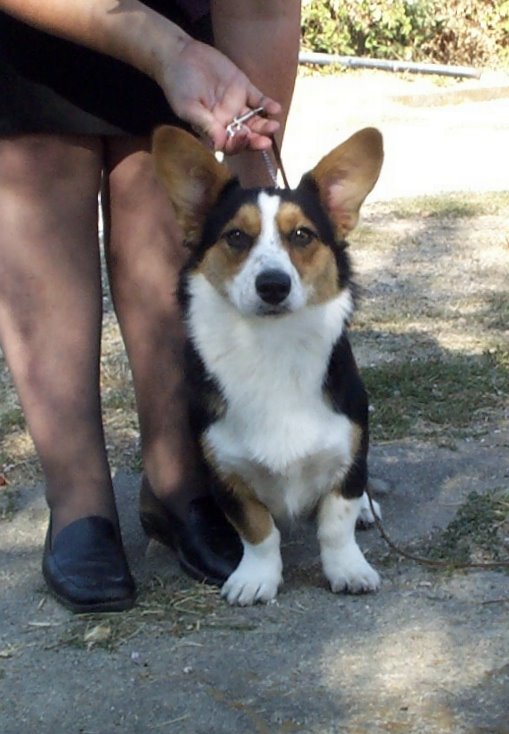 For a nice comparison to an immature chest, above is Phoebe when we first met her. She was about 10.5 months old. 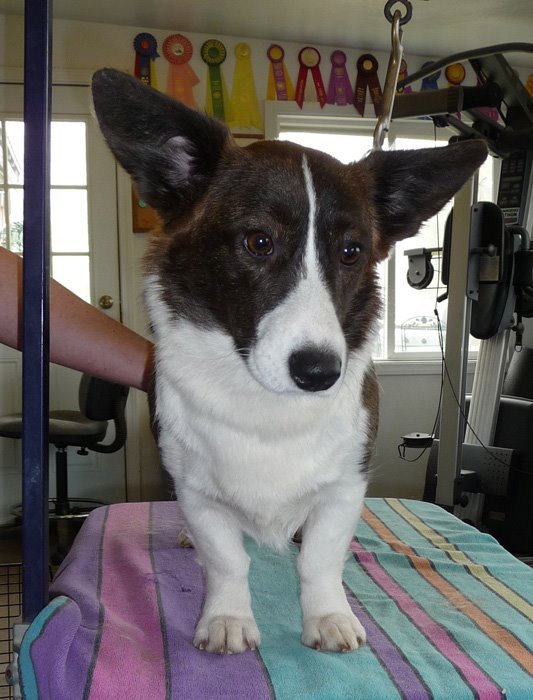 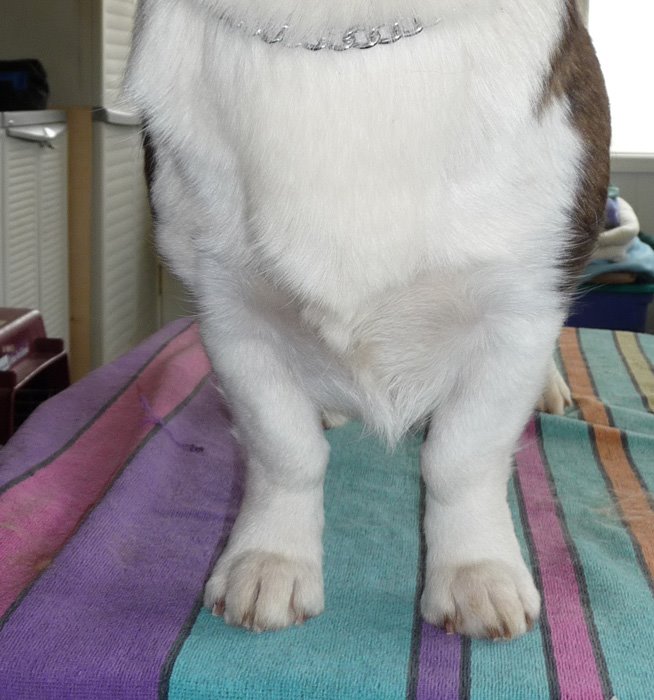 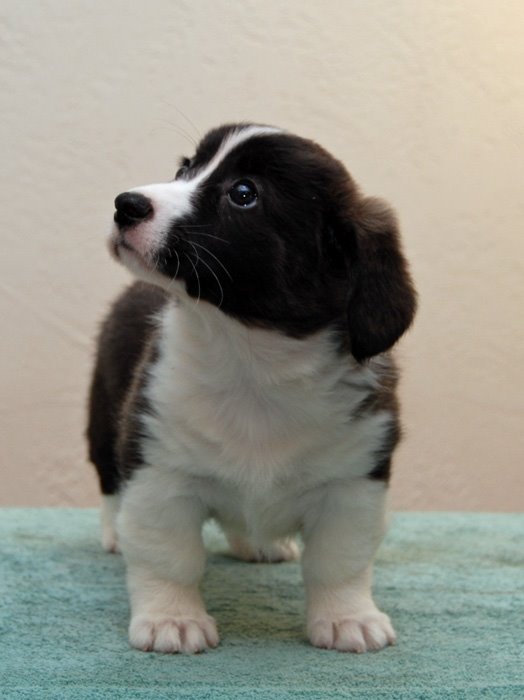 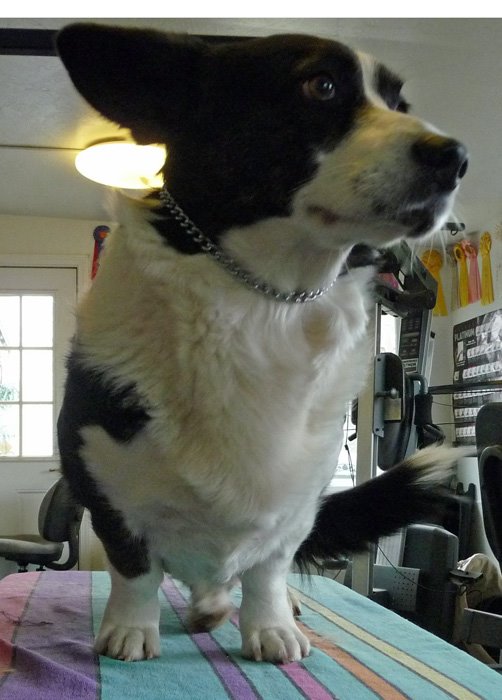 Huxley (Ch Wolfrun Brave New World): 4-year-old dog. Huxley has a nice fit to his shoulder and a good length of upper arm. Huxley is somewhat wider in front than the girls. Mature males do have more chest: compare the pictures in the Illustrated Standard (male – female). At the risk of boring the more knowledgeable readers, when we say that the chest should be “egg shaped” what we are envisioning is a hard boiled egg standing on its small pointed side. The big side is at the shoulders, the chest should come down in a point. 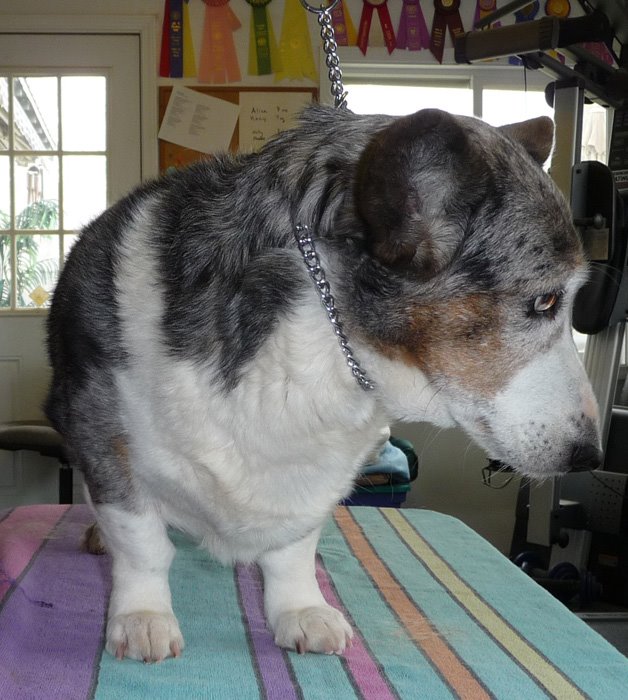 Kacy (Ch C-Myste Shepherd’s Moon), mature bitch who will be 13 years old on 4/3/09 and whelped a single litter. She is now becoming “the ancient one” and was not at all pleased about being on the table. Though she has smooth-fitting shoulders, Kacy has a round chest shape, which results in a wider and straighter front than is ideal. She also has oval rather than round bone, which you can note from her foot shape.

Recently we heard that a somewhat leggy bitch had been described as having “too long an upper arm”. I don’t think that’s possible. Many breeds including Cardigans have a problem with too short of an upper arm. My guess is that there was an incorrect understanding of which bone the “upper arm” is. 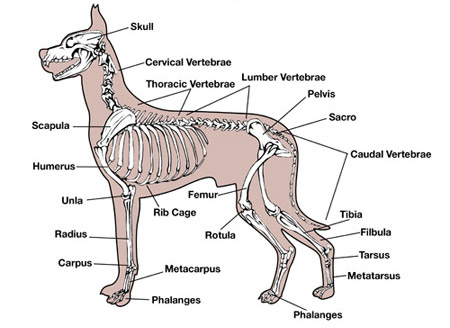 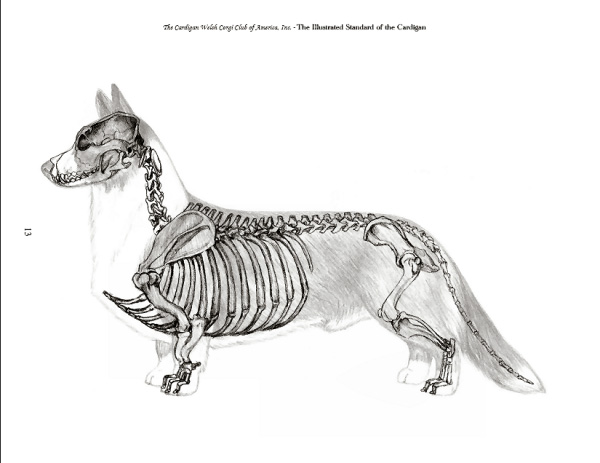 Here’s a Cardigan skeleton from the illustrated standard compared to a labeled “normal” dog skeleton. The “upper arm” is the bone labeled “humerus”. The bitch in question has a long forearm or foreleg (“radius”). We have also had dogs with long pasterns (“metacarpus”).

Here’s a glossary of terms from “The Kennel Club” (UK). It does help if everyone is on the same page and that when we use a word to describe something, that we use the correct word.