First, thanks to Emily @ Pawcific and to everyone else who has joined in. And thanks to those who sent me more front pictures. I’ve made the decision to only use dogs that we own or have bred. Jeri commented that at this point in our “breeding program” we have pretty good fronts. I’m afraid that I can’t take credit for Alice or Phoebe, though they have certainly been assets.

I think that it takes most people a while before they can see shoulder placement; at least it took me a while. Part of the problem is that there are so many incorrect shoulders being shown. Until you see enough good shoulders it’s hard to spot the difference. An additional problem seems to be that some mistake the gait produced by a forward placed shoulder as “reach”. Too often it is even rewarded by judges. It is up to us, the breeders, to know the difference.

Above are the dogs that I will be contrasting: two boys and two girls. The two on the right side of the table are litter mates who we originally kept but then placed.

In the first set of photos, no lines are drawn on the dogs. You might want to scroll back up to these to compare them to the pictures below.

In the above group of pictures I have drawn a line from the shoulder blade to the point where the shoulder joins the upper arm and a second line following the upper arm to the elbow. I have then drawn a third horizontal line back from the intersection.

We think of an ideal “layback” of the shoulder as being 45 degrees. That means that the angle formed by the shoulder blade line and the horizontal line is as close as possible to that angle. Secondly, we would like the shoulder and upper arm to form a right angle (90 degrees). And third, we want a “long upper arm” which matches as closely as possible the length of the shoulder. We rarely achieve this, but we can strive toward it.

The bottom set of photos shows a way to visualize shoulder placement. Draw a line just behind the front assembly, and another before the rear. With a Cardigan, these lines will divide the dog approximately into thirds. Note in the right-hand pictures that the front section is quite apparently narrower.

Another way to think of shoulder placement is that the front legs should appear to support the body of the dog, not the head.

Yesterday Mom and I (and Huxley) drove to Reno, NV to meet Gerri Rivera who will be Digger’s new mom. Gerri had the foresight to provide a pillow and a toy with the smells of Digger’s new sister Jazz and his new cat J.D. 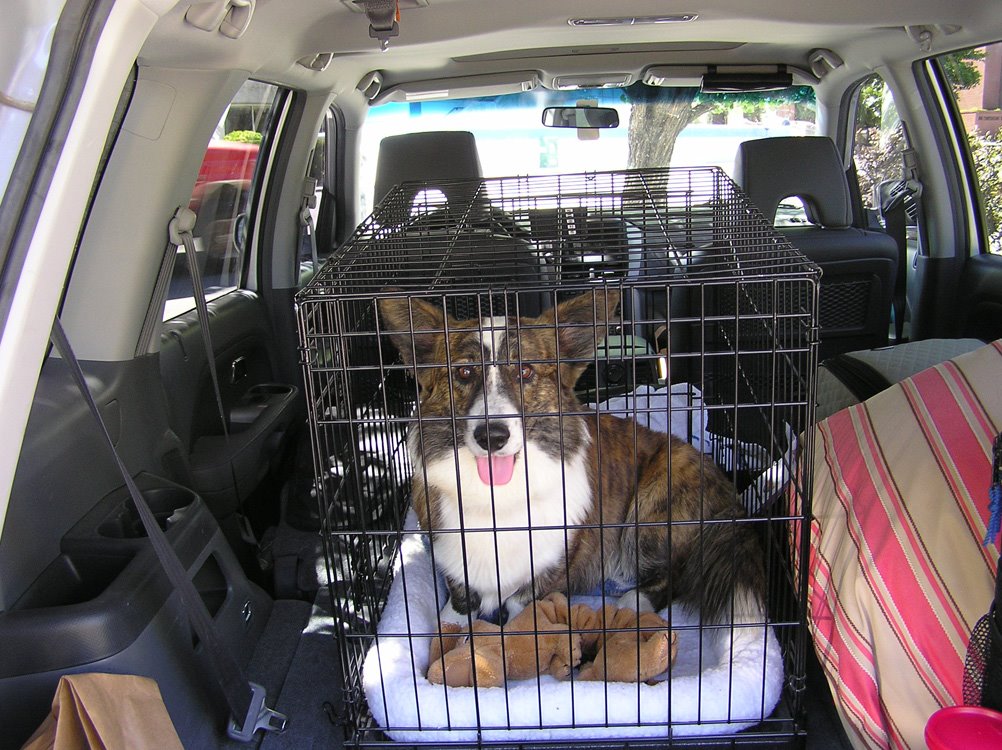 Look at his big Cardi smile in his new car. Yeah, we always miss them a whole bunch more than they miss us.