I’m finally feeling like I may live (cough). Time to get a few things done: like the handbook ads which are due on the 28th and the rest of the pictures from Westminter.

Did I mention that it was cold that day? Probably the coldest I’ve ever been in my life. Add to that wearing a skirt instead of jeans and long underwear . . . and having to get across the street to watch the Cardigans at 8 a.m. Miserable.

Unfortunately due to light (absence of) and distance some of the pictures aren’t as clear as I would have hoped. 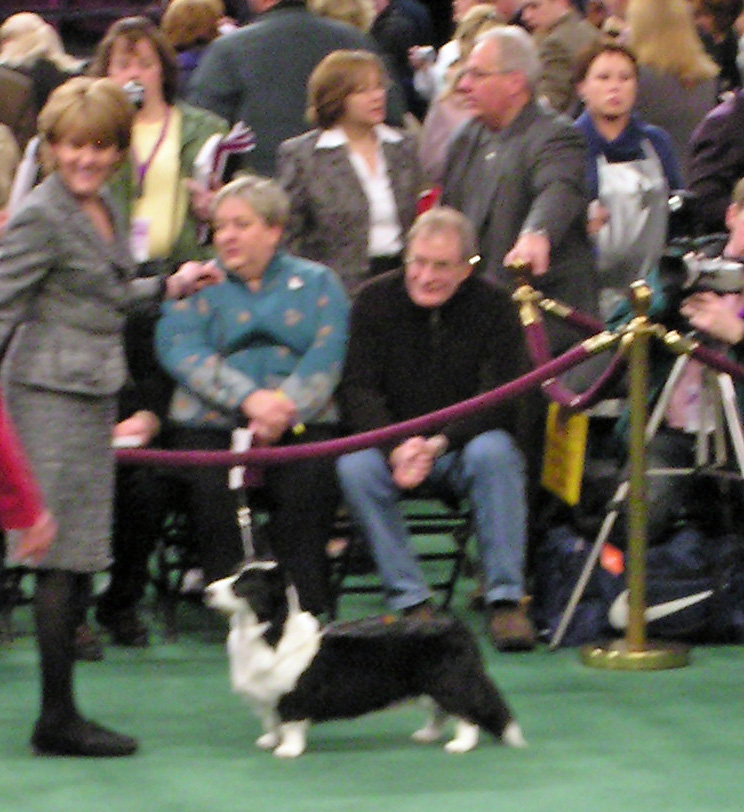 Huxley’s sister Maya was there.

Cardigan line-up. There were bigger rings and smaller rings. The Vallhunds were in a big ring; go figure. The Cardigans had one of the four small rings, too small to be able to adequately judge side-gait IMNSHO. The judge pretty much had to rely on silhouette and what he could see going and coming. Being a side-gait and a shoulder fan myself, this left a lot to be desired.

Autumn looked very nice especially as I know that Patrick was sick with this crud as well. Also Kelly was there showing Dianne Webster’s bitch Faith and she looked magnificent (Faith, that is). 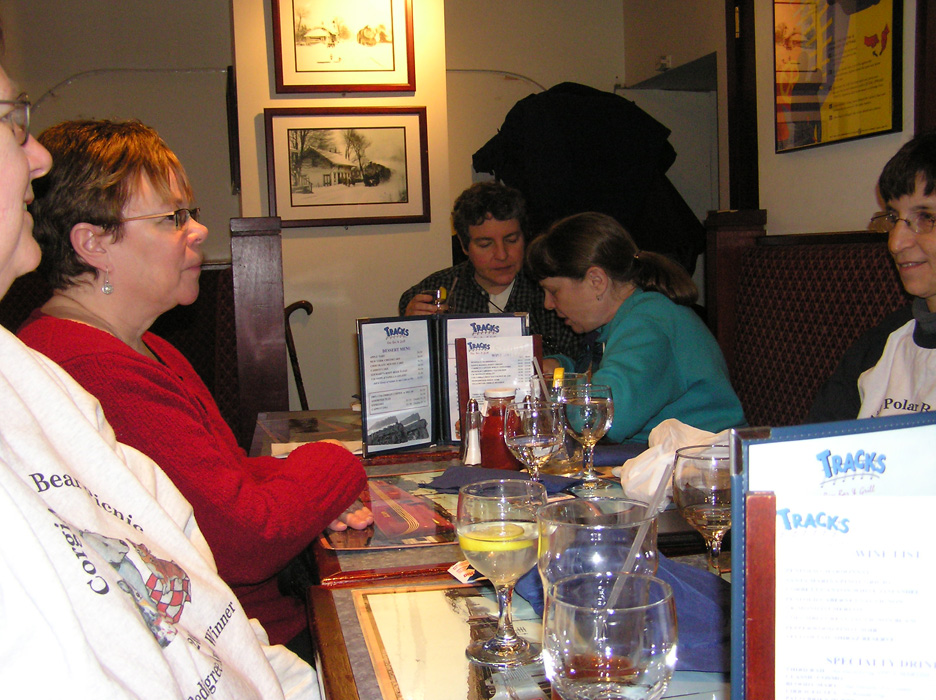 After Vallhund judging, several corgi-l people got together and went out for lunch. I learned some things about New York. I learned that there is a underground city which does not require that you go out into the cold. We had lunch at Tracks in Penn Station. Penn station lies underneath Madison Square Garden. There is a level for subways, and a level for shopping and eating, and below that a level for the trains. 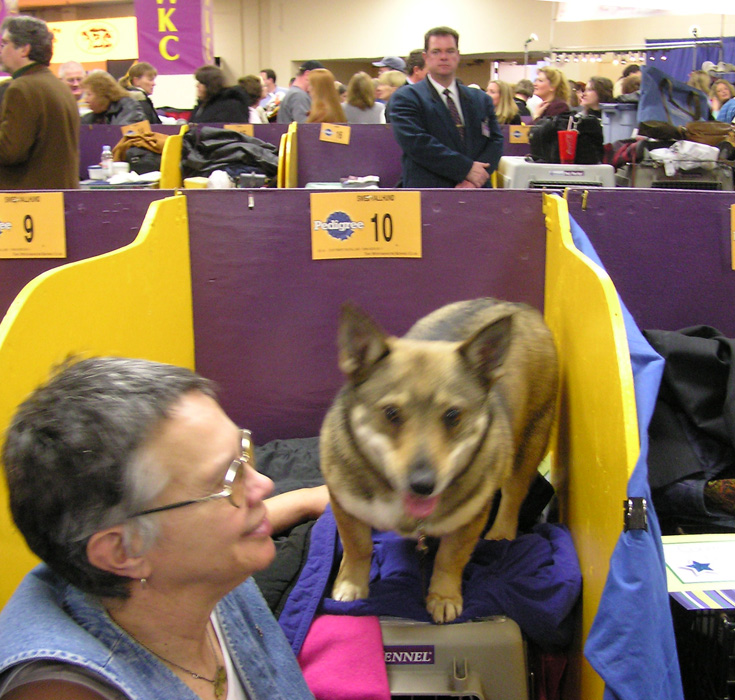 After lunch, back to the benching area until 8 p.m. That’s a long, long time. Things learned: no matter how frigid, frozen, downright cold it is outside it is hot in the benching area. And it was crowded, but it wasn’t as bad as I expected it to be. I had heard reports about people who couldn’t get their dog to ringside because of the crowds. I guess the people in the aisles at the Rose City Classic have prepared me for that. Getting to the rings in January in Portland can be even worse because you have to go through multiple buildings. At the garden, the rings are relatively close to the benching area, which lies around a section of the perimeter of the arena. We took a crate for Nikki, and should have saved the room. I don’t think she ended up using it at all, except for a vantage point to see better.

I was also disappointed in the lack of shopping. Everyone knows that one of the main reasons that you go to dog shows if for the shopping, right? The vendors at Portland are ever-so-much better. 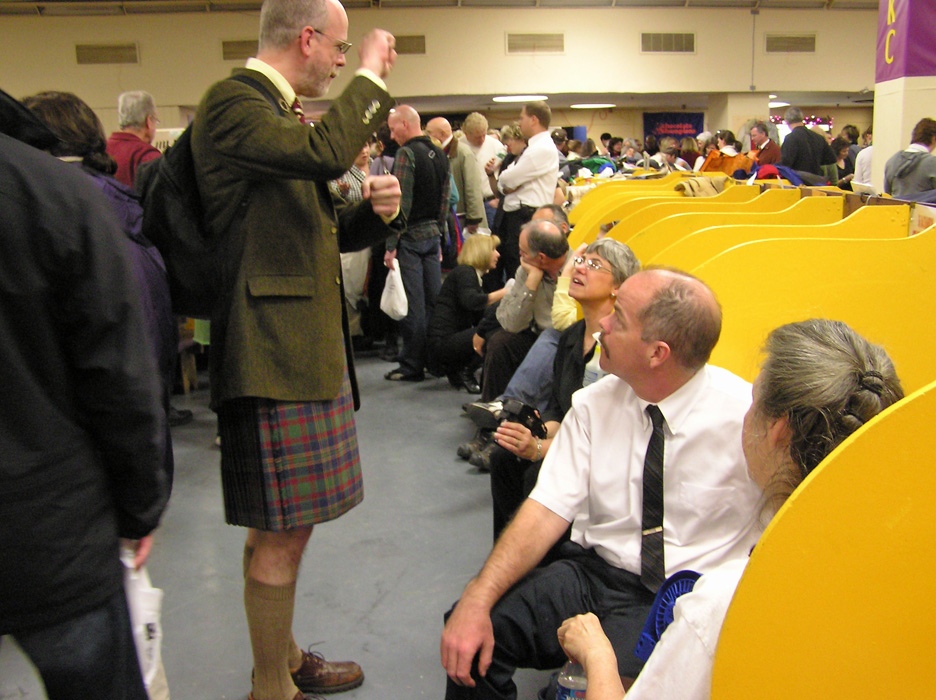 Den conversing with Vallhund people. He rode the tain in for the day from Long Island and it was beyond great to finally meet him in person.
By the time you get let out at 8 p.m. and get your dog and your gear back to the hotel and then get back across to the garden again, you miss the first group and get to sit in nose-bleed section. More things learned: one of you gets a spot to sit if you have general admission tickets while the other takes the dog back. Other things learned: you might think that New York restaurants would be open all night so that you could get dinner afterward. Maybe somewhere, but not in the local area. But on Tuesday night I learned that the hamburgers/cheeseburgers sold at the garden are really good: like home-made. And there is also not only beer and wine available but a full bar vendor with mixed drinks. I was unfortunately too sick to be able to enjoy such libations. Yep, things sure are different from how they are at home in Oregon. Maybe it’s because people always have designated drivers (subways, trains, cabs, buses) so inebriation isn’t as big an issue? 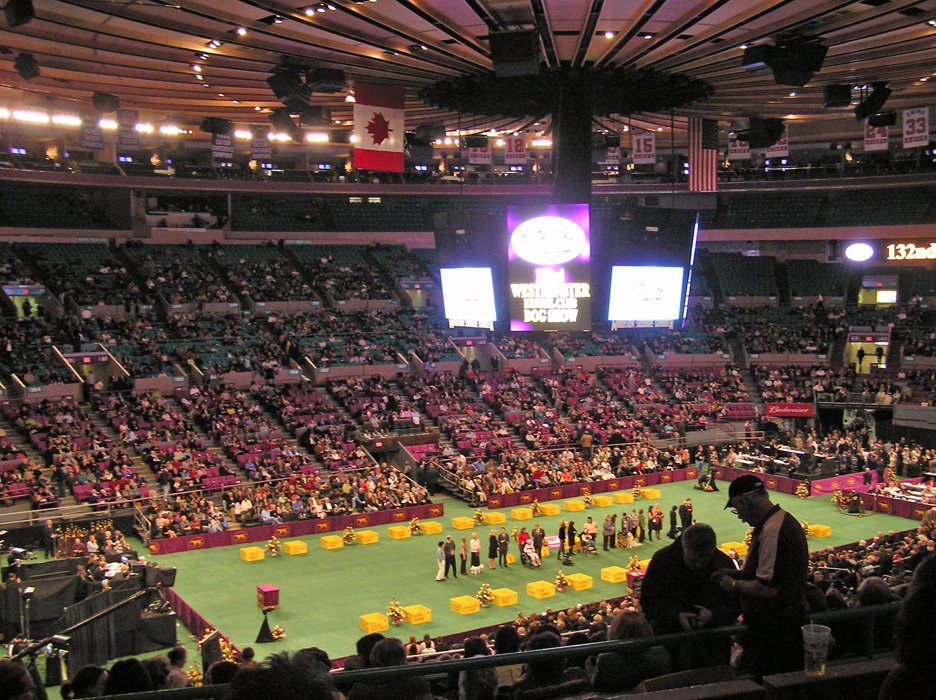 This is how the group ring looked from our seats. I still need to watch the video that Tom recorded so that I can see what really happened (I’ve only watched herding group to date). 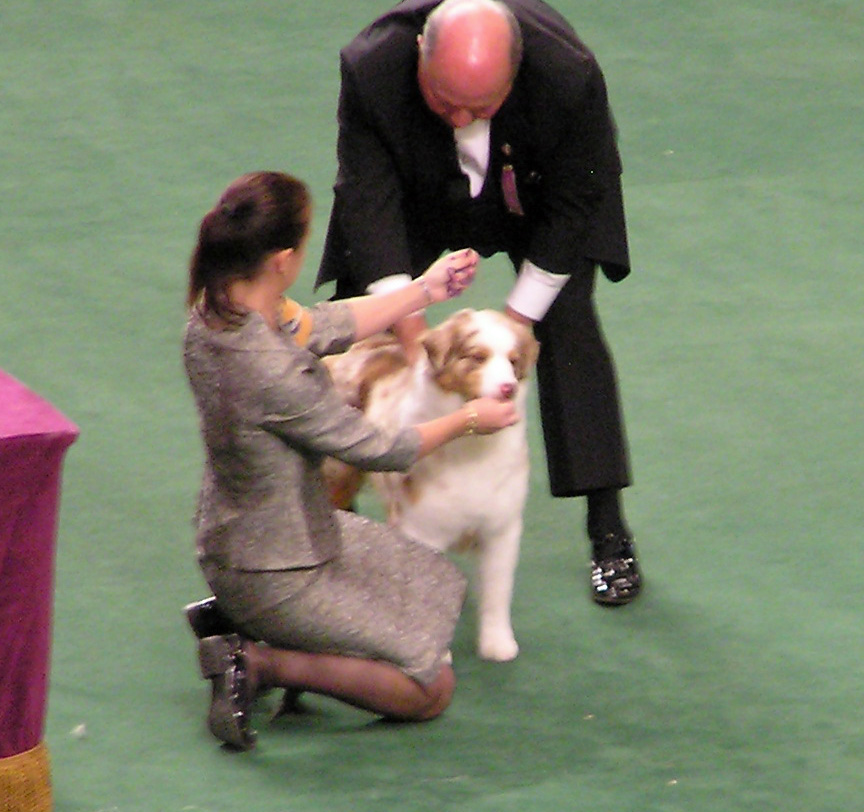 Nice, nice Aussie who took Group I. At the end of the night as we were riding the elevator back up to the 16th floor of the Penn, a junior-handler-boy was on his cell phone letting people know in an incredulous voice that “Jimmy lost the group!” (gasp). The elevator was packed with herding-group people who then had a heyday with that remark. I mean everybody knows that Jimmy is supposed to win with whatever GSD he turns up with, right? Sort of like the poodle in the non-sporting group (not to mention toy group) I suppose. 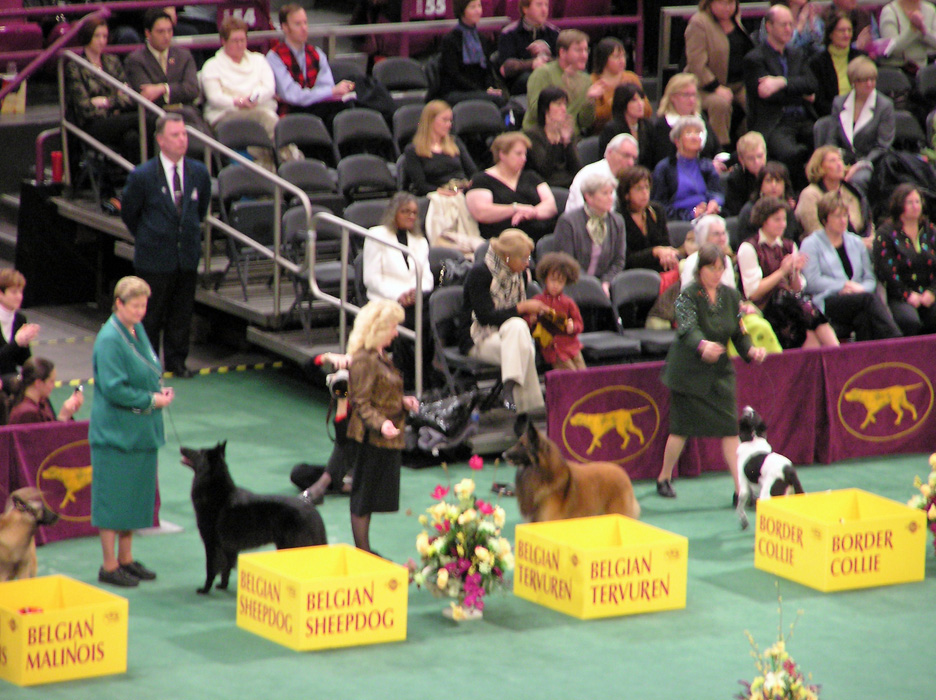 Michelle was there with her Terv. We saw quite a number of west-coast people that we know. 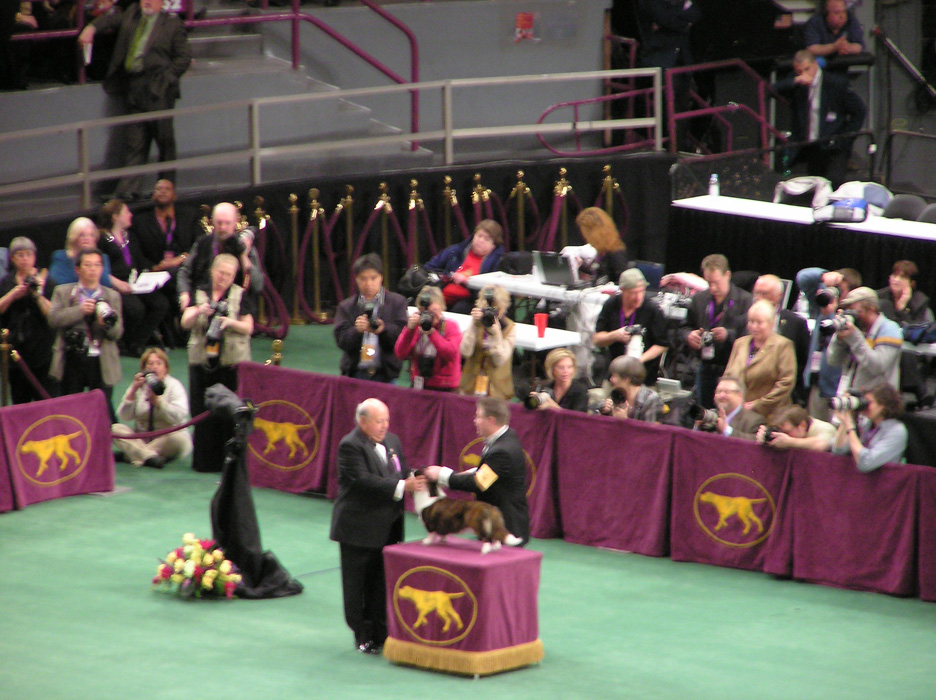 Patrick with Autumn on the table. You can see the big camera that gets the close-ups of the dogs in this picture. The people in the gallery at the end are all press, with laptops and cameras busily at work. 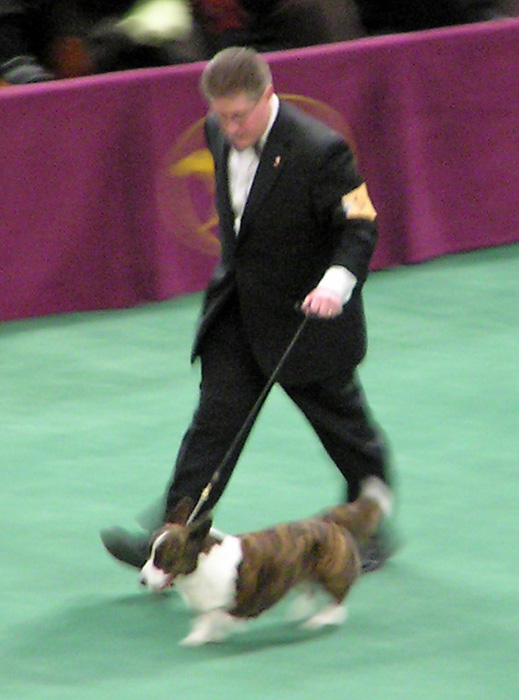 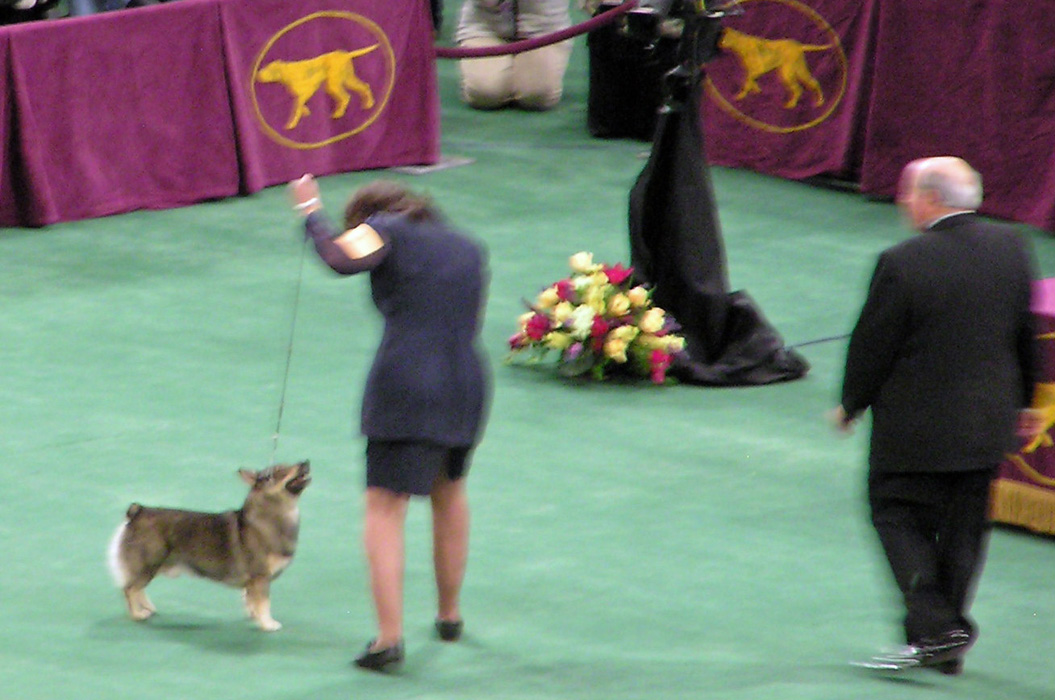 And Cheryl and Bo, the Vallhund Best-of-Breed.
I’m already talking about “next time”. Ignore the strangling noises issuing from Tom. I think that Rikkii will be more competitive than Nikki when we can get him ranked. And I’d really like to take a Cardigan.